Skylake, Intel's 6th generation Core processor is upon us. It's initially available for early adopters in a high-performance i7 and mainstream i5 variant from the 'K' series which means they can be precision overclocked above their base speeds - an advantage of particular interest to enthusiasts [and sheds light on why Intel chose to unveil the chips at Gamescon last week].

The Core i7-6700K has two cores, with two virtual cores through HyperThreading, 8MB cache, a base clock speed of 4GHz [increasing to 4.2GHz with turbocharge] and a thermal design power of 91W. It's little brother the Core i5-6600K has the two cores but no HT, a 6MB cache, base speed of 3.5GHz [3.9GHz turbocharged] and the same TDP rating at 91W.

Although like it's predecessor Broadwell, Skylake is a 14 nanomicron processor but it uses the new Socket LGA 1151 not the LGA 1150 used since Haswell in 2013. This means that adopters of Skylake will need a new motherboard. Additionally that the majority of Skylake-based systems will need to use the newer DDR4 memory as standard to take full advantage of the system.

A new motherboard is required? 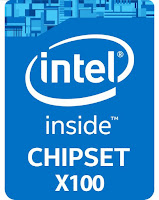 To support Skylake and it's new socket, Intel has released a new motherboard chipset: the Intel 100-Series, codenamed Sunrise Point. Varients of the 100-series such as the H110 and Q170 will support Skylake-based systems of various uses from mobile business laptops to high-performance desktops.

The most powerful and feature rich of the 100-series chipset is the Z170, which is also the only one that will support CPU/GPU/RAM overclocking and therefore the only one to reach the market thus far to accompany the Skylake 'K'-series CPUs. The Z170 boasts 20 PCI-Express Gen 3.0 lanes which are PCIe lanes that go through the chipset, in addition to what the CPU is wired to. It also sports Intel RST (Rapid Storage Technology) over the M.2 and SATA-Express ports.

Other features you can expect to find on some Z170 boards are Optical Audio, Thunderbolt, Displayport, NVMe U.2 adaptor and even USB 3.1 support.

Most Solid State Drives are actually too fast for the 6Gbps SATA III bus they're connected to. Both SATA-Express and M.2 offer performance increases for existing drives and pave the way for faster drives to be introduced. SATA Express, uses the same connector as older SATA drives but uses 2 PCIe lanes rather than the SATA bus to boost storage speeds. The newer connector M.2, can also speed up a compatible SSD using up to 4 PCIe lanes. These features are manufacturer/motherboard dependent.

Skylake is the first mainstream Intel microarchitecture to support quad-channel DDR4 memory up to 64GB as standard. Conventional DDR3 RAM will not work in 100-series boards but in some cases a motherboard manufacturer will provide compatibility with special low-voltage DDR3L RAM, likely meant for low-power business users.

Memory manufactures are currently unleashing DDR4 Quad and Dual-channel kits for Skylake-based systems and at speeds from 2133 to 4000 MHz.

In addition to phasing out DDR3 RAM, Skylake will force some users clinging to outdated technology elsewhere in their computer hardware. VerTecX21 advises anyone with conventional PCI components they want in thir new machines or have VGA monitors connected directly to mainboard graphics to upgrade ASAP as neither of these technologies is supported by Skylake/Sunrise Point, - although workarounds may exist for some.
Posted by VerTecX21 at 01:19 No comments: 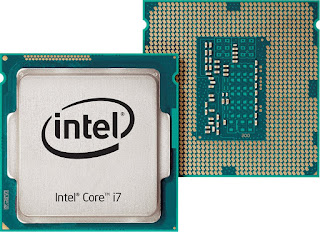 Since 2007, Intel's Processor Roadmap has been based on a 'Tick-Tock' structure to mark changes in the process and die shrinkage. Each 'Tick' represents shrinking of existing microarchitecture while 'Tock' means a brand new microarchitecture.

The fist 'Tick' was the Presler, released in January 2006, and was the first Intel Core chip for the new 65 nanomicron (nm) fabrication process. VerTecX21 waited and selected the first ever 'Tock' a Core2 class processor released 18 months later when a Kentsfield Core2 Quad Q6600 2.4GHz processor became the CPU for Maxximus in August 2007.

In December 2008, VerTecX21 investigated the possibility of upgrading to a 1st generation Core i7 Bloomfield processor based Main Computer to take advantage of Intel's 'Tock' now for the 45 nm fabrication process. However, research suggested that the level of performance increase would not support the cost of the upgrade at that time.

With the release of the 'Tick' for the 32 nm processor in Jan 2010, VerTecX21 decided to wait for the 32 nm 'Tock' architectural change to combine the stability of an already established fabrication process with the advantage of the newest microarchitecture as early as possible. To this end the Second-generation Core i7 2600K 3.4Ghz variant of the Sandy Bridge processor became the basis for Apophis in February 2012.

Much as VerTecX21 eschewed a 45 nm processor upgrade in 2009, it also declined to elect to upgrade in early 2014. An upgrade at this point would have seen a 22 nm 'Tock' likley based on the Haswell-E 4th Generation Core i7 processor which was released in June 2013.

Intel's Broadwell 'Tick' for the new 14 nm 5th Generation Core did not include an unlocked multiplier processor when it entered the market in September 2014. Instead Intel released Devil's Canyon a 'refresh' for Haswell at the same time. Despite the power of these CPUs they were still based on the 22 nm process and VerTecX21 passed on them. Eventually, unlocked Broadwell unlocked CPUs did not reach the market until May 2015 but they were clocked less than the Devil's Canyon and as Skylake was scheduled for release only three months later they were passed over by most.

On August 5th 2015 performance and mainstream 'K' series processors for the 14nm 'Tock' known as "Skylake" were the first of the family to be released. VerTecX21 is soon expected to announce the design and construction of a new Main Computer around a 6th Generation Core i7-6700K 4GHz [4.2Ghz boost] processor.

Beyond "Skylake", the future is uncertain for Intel. At time of writing a "Cannonlake" 7 nm 'Tick' processor has been delayed due to fabrication issues and instead Intel will release a second 14 nm 'Tock' in late 2016 essentially changing the 'Tick-Tock' cadence to 'Tick-Tock-Tock' for the time being.

Email ThisBlogThis!Share to TwitterShare to FacebookShare to Pinterest
Labels: CPU, i7, Intel, Skylake

On Wednesday 29th July Windows 10 [Win 10] begins rolling out, but are you getting it? Do you need it? Do you know how to get it?

Windows 10 is not like Windows 7 or 8 insofar as you don't need to go out and buy it, you just download it for free [until July 29th 2016 after which a download will cost you]. It promises a few new upgrades but has a few iffy things that people don't like but features are not today's discussion. The bottom line is: eventually if you want to use Windows - at some point Win 7 and 8 will become "unsupported" and you'll be forced to upgrade anyway just as people recently had to do with the venerable Windows XP.

At launch, Win 10 will first be downloaded and installed by all the brave souls who have been using the beta version for months and update their version to the launch release. Then Win 10 will be made available to Win 7 and 8 users in batches. This is likely to prevent the Internet from grinding to a halt on launch day.

To reserve a Win 10 download [for you to install after 29th July 2015], click the Windows icon in your system tray.  If the icon isn't there it could mean that your device is not compatible with Win 10 but it's likely just an issue with your update settings. See the F.A.Q. here.

The Windows icon should spawn the "Get Windows 10" app in the main screen like below... 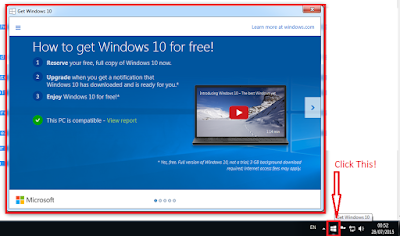 Use this app window to reserve Win 10. The Windows icon should appear for everyone after launch regardless of system/version and will assess your machine to run Win 10 before installing. Your device will likely fail to meet Win 10's requirements if it does not have:

If your device doesn’t significantly exceed those specs, you’re likely running Windows XP and you will need to upgrade your computer - trust us, it's time!

VerTecX21 will not be switching to Win 10 until all hardware and software currently in use is verified as functioning in the new OS. This is to maintain project deadlines which could be disrupted by software/hardware incompatibilities. Even if this Windows release does not have any unforeseen 'hiccups' there will most likely still be a few bugs and incompatibilities for users to deal with.

Thousands of people will likely be hammering the servers for the early release so VerTecX21 suggests that all readers of this pause and allow some time to pass before downloading as Microsoft may employ fixes for things that would’ve caused issues, and in all likelihood you'll be able to download Win 10 more quickly later.

Once your Windows 10 is reserved files will start downloading in the background before launch day, and you’ll be able to complete the download and start installation on July 29 or later, depending on Microsoft's rollout.

Like previous Windows updates from one version to another, the default Win 10 update shouldn't  overwrite all of your old files or completely wipe your drives and start from scratch, so your files should be safe and sound. However there's obviously no guarantee of this so VerTecX21 suggests a full backup before installing Win 10.

Interestingly if you prefer a clean install [which VerTecX21 recommends be performed at least yearly] you can also do that but after you’ve gone through the upgrade process. Once you’ve upgraded you will be able to reinstall, including clean install, on the same device. You’ll also be able to create your own installation media and use that to upgrade or reinstall after you’ve upgraded.

Remember importantly this Windows 10 upgrade is free on any Windows device for a year - make sure to update by July 29, 2016.
Posted by VerTecX21 at 01:00 No comments:

Email ThisBlogThis!Share to TwitterShare to FacebookShare to Pinterest
Labels: Windows

Welcome to the new VerTecX21 Blog

Mission: To disseminate technical news and knowledge that VerTecX21 itself feels is worthy of note to the average technology-equipped human being.

Ciarán Creedon, Director, VerTecX21
Posted by VerTecX21 at 23:30 No comments: